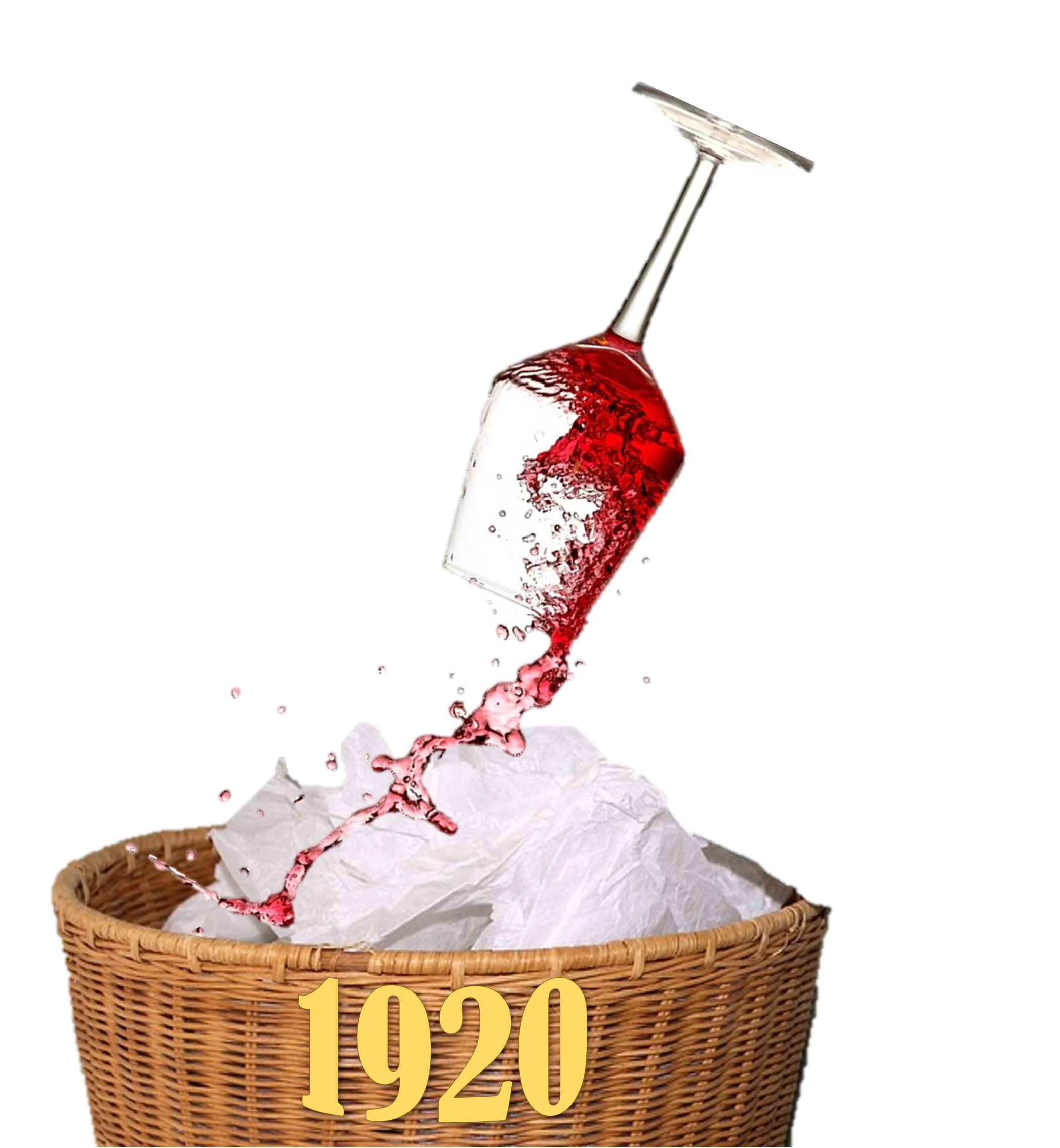 On January 17, 1920, the United States of America became officially “dry” as prohibition formally went into effect.

The Eighteenth Amendment, which prohibited “the manufacture, sale, or transportation of intoxicating liquors … for beverage purposes,” was itself ratified on January 16, 1919, but it was agreed that it would not go into effect for a year after ratification to give the country time to prepare. Interestingly, the Eighteenth Amendment was not the first time prohibition was codified into law in the U.S.; the temporary Wartime Prohibition Act, passed November 18, 1918 and enacted July 1, 1919, banned the sale of alcoholic beverages with an ABV above 1.28% in order to preserve grain for the war effort.

The Eighteenth Amendment neither defined “intoxicating liquors” nor provided penalties for breaking this new law. On the day the Eighteenth was to go into effect, so too did the National Prohibition Act, also known as the Volstead Act. Named after Andrew Volstead, a prominent Minnesotan prohibitionist and Representative, this Act gave both the states and the federal government the power to enforce the Amendment through “appropriate legislation.” It also defined intoxicating liquor as any alcoholic beverage with an ABV above 0.5%, a harsher limit than had ever been previously enforced. President Woodrow Wilson vetoed the Volstead Act, albeit mostly on technical grounds with respect to wartime prohibition, but both the House and the Senate overturned this veto almost immediately.

Despite prohibition going into effect 102 years ago, this December also marks the 89th anniversary of the repeal of prohibition, as it only lasted for 13 years. Prohibitionists seemingly had largely positive intentions behind the Eighteenth Amendment and the Volstead Act; they believed that limiting alcohol would also limit violence, accidents, and “immoral behavior.” While the reality of those beliefs can be debated, the Amendment and Act resoundingly failed to achieve those goals. Instead of minimizing violence and lawlessness, the Eighteenth Amendment caused an explosion of organized crime and corruption.

Prohibition did not stop the average person from wanting to consume alcohol at least occasionally, so a black market for alcohol sprang up and flourished.

Hundreds of thousands of speakeasies cropped up around the country, and gangs formed and strengthened in many areas. Gangs that were willing to deal in alcohol were frequently so wealthy that they could easily bribe police officers and other officials, leading to widespread corruption. One of America’s most infamous gangsters, Al Capone, made much of his fortune from bootlegging. While prohibition was not the only difficulty facing the country in the 1910s and 20s, the rates of murders and other crimes jumped up significantly after the Eighteenth Amendment came into effect.

Beyond the crime and corruption, alcohol itself became more dangerous during prohibition. Given its illicit nature, producers and distributors began to heavily concentrate alcohol so they could transport more product in smaller volumes.

However, this led to a dramatic increase in alcohol poisoning deaths. Additionally, the federal government was aware that bootleggers would resell alcohol that had been legally distilled for industrial purposes as beverages, so it mandated producers to include poisonous additives in their alcohol. While the federal government’s goal was likely to hurt bootleggers’ businesses, not to kill Americans, customers dying from tainted alcohol certainly did hurt bootleggers’ businesses.

Moreover, prohibition removed most legal and societal restrictions on alcohol. Where consumers could once trust that their drinks were safe, novice and careless illegal distillers were more likely to create contaminated products. Where alcohol consumption could once be controlled on a county- or township-wide basis through taxes, licensing laws, and ordinances, it became relegated to an underground activity that could no more be controlled in location or intensity than any other type of crime.

Prohibition did not decrease preventable deaths, either from alcohol consumption or from violence. In fact, the murder rate in the U.S. dropped sharply after its repeal. Opponents of the Eighteenth Amendment had talking points that may sound familiar to us today; they spoke of personal liberty, the tax revenue that could be gained from legal alcohol, and the crisis of organized crime they were facing. On December 5, 1933, the Twenty-first Amendment was ratified by enough states to be entered into federal law.

Looking back on the history of our country, it is easy to find similarities to certain modern-day causes. For example, the legality of growing, distributing, and consuming marijuana. Do you think that weed will become completely legal the same way that alcohol ultimately did?

Alcohol Prohibition Was a Failure (cato.org)