Possession With Intent to Deliver (PWID) Attorney in Philadelphia 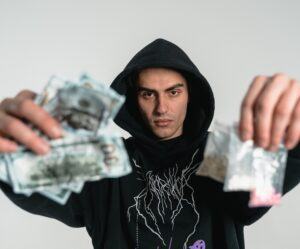 PWID stands for “Possession With Intent to Deliver.” Pennsylvania law defines PWID as the “manufacture, delivery, or possession with the intent to manufacture or deliver, a controlled substance by a person … not registered or licensed by the appropriate State board, or knowingly creating, delivering or possessing with intent to deliver, a counterfeit controlled substance.”

A PWID charge may be applied when someone is found to possess sizeable amounts of drugs as well as cash and items associated with distribution, such as baggies and scales. Essentially, this charge distinguishes between people who are drug dealers rather than simply drug users.

In Pennsylvania, selling drugs is classified as an ungraded felony (which is similar to a third-degree felony) and can carry serious consequences. In addition to thousands of dollars in fines, selling weed can come with 5 years in jail, selling crack or cocaine can mean up to 10 years in jail, and selling heroin can earn a 15-year prison sentence. Other factors, such as the type and amount of drugs involved and whether you have a criminal record with previous drug offenses, can change the severity of a Possession With Intent to Deliver charge.

Defending Against Possession With Intent to Deliver (PWID) Charges

“Intent” is the operative word when defending against PWID charges. For the charge to stick, the prosecution must prove beyond a reasonable doubt that the individual planned to sell and/or deliver the drugs to a buyer. A skilled Drug Defense Lawyer will know exactly which questions to ask to have the best chance of winning a case, and our attorneys have decades of experience with drug charges. Some questions that might apply to your case are below:

Was a sale observed?

In some cases, PWID charges may be brought against you if a police officer witnesses a transaction in which some amount of United States currency is exchanged for small unknown objects. In others, an undercover officer may pretend to be a drug buyer and directly “purchase” drugs with pre-recorded money in an effort to prove someone is dealing drugs. These situations may seem tough to defend against, as a sale was directly witnessed, but an experienced Drug Defense Lawyer knows how to beat even these cases.

Did you have large amounts of cash on you?

Typically, a drug dealer has larger quantities of cash in their possession than the average person. Depending on the amount of money involved, a PWID charge can actually be upgraded to a more serious drug trafficking charge. However, if excess cash was not discovered, an attorney may be able to argue that you are simply someone who uses drugs, rather than someone who was Possessing With Intent to Deliver.

Do you possess drug paraphernalia?

Drug paraphernalia refers to the objects that are used to consume drugs, such as rolling papers, pipes, needles, and straws, among many others. These objects are more likely to be possessed by someone who is using drugs rather than selling them; as the saying goes, “don’t get high on your own supply!” If paraphernalia is present, an attorney may be able to convince the court that you were using drugs rather than selling them.

How were the drugs packaged?

Possessing many smaller packages of drugs may be more indicative of PWID than having a moderate amount in bulk. While an attorney may be able to argue that possessing bulk just means that you were getting ready for a long holiday weekend, having many small packets can point towards intent to deliver.

A stash house is the area where a dealer keeps their drugs before they are sold. A dealer would typically not want drug users to have access to their stash; only someone with intent to deliver would have a key.

Were multiple people working together?

If a drug dealer has other people helping them to sell drugs, conspiracy charges may also be brought against them. Conspiracy is a different charge from a PWID, and has the potential to carry a separate sentence, but a good criminal defense lawyer can help you with both.

Possession With Intent to Deliver is a serious charge with potentially life-altering consequences. The facts are vital to getting you the best outcome possible, so hiring a competent criminal defense lawyer is crucial.

A talented drug attorney will know if it is necessary to hire a drug dealing expert to testify that there was no intent to deliver, as well as how to defend against the prosecution if they hire another expert to say the opposite.

If you have been charged with PWID or other drug charges, give yourself the best chance at a good result: contact Kenny, Burns & McGill today.